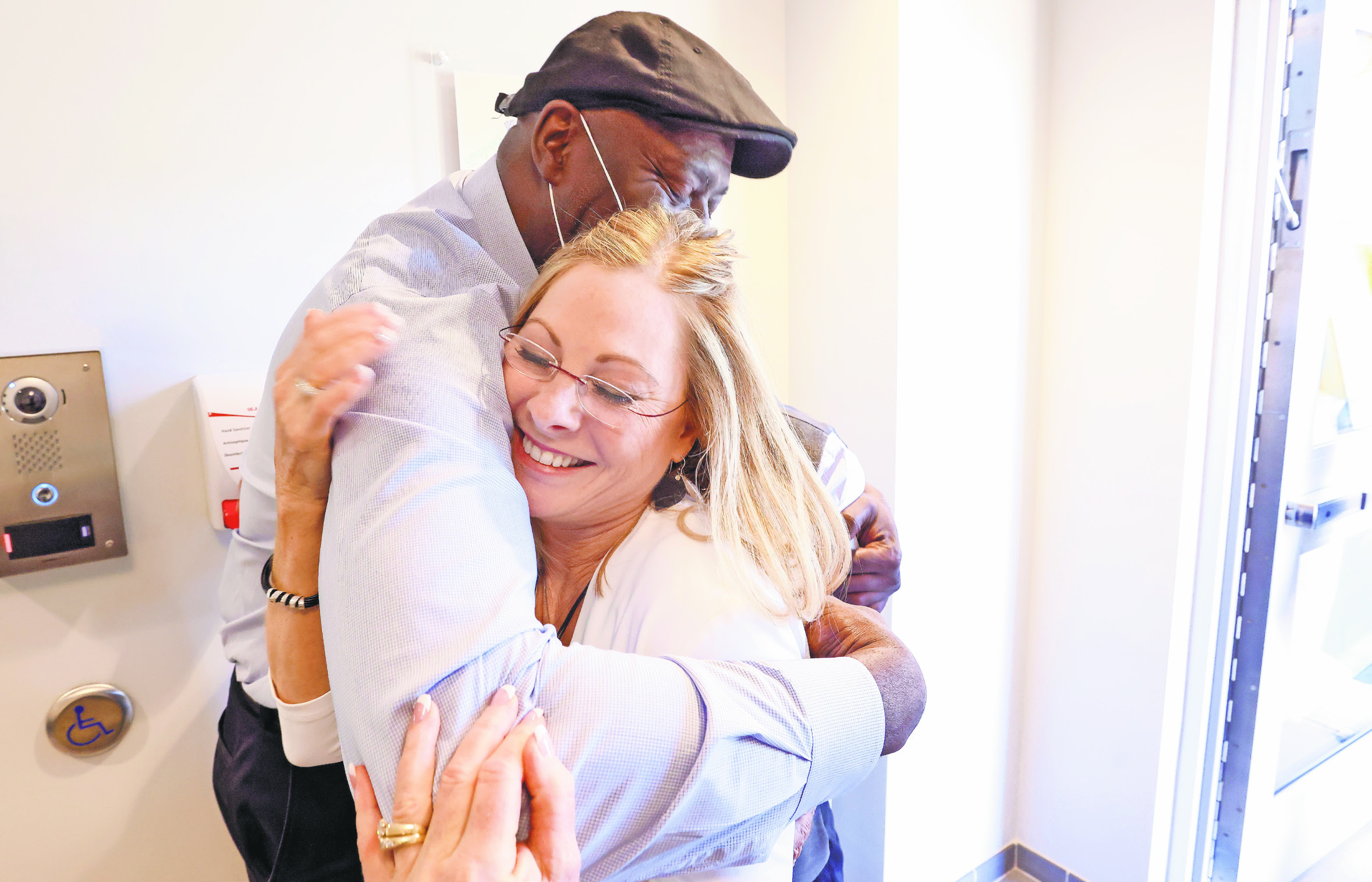 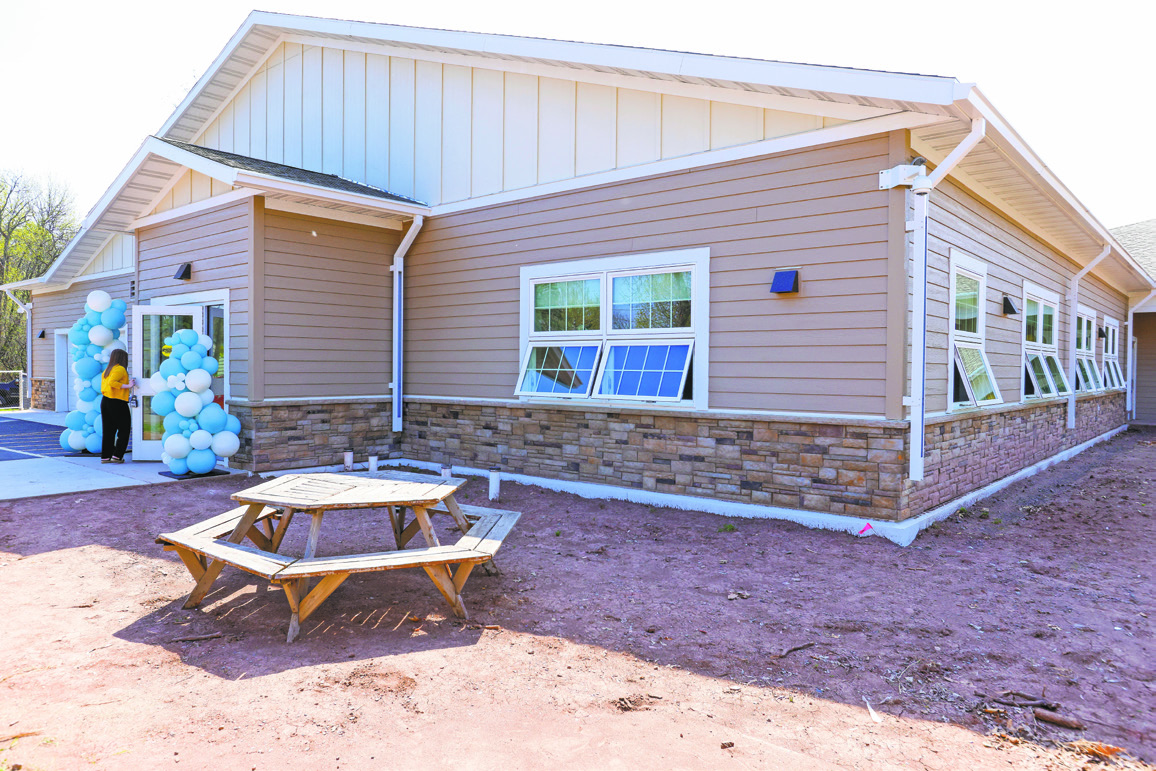 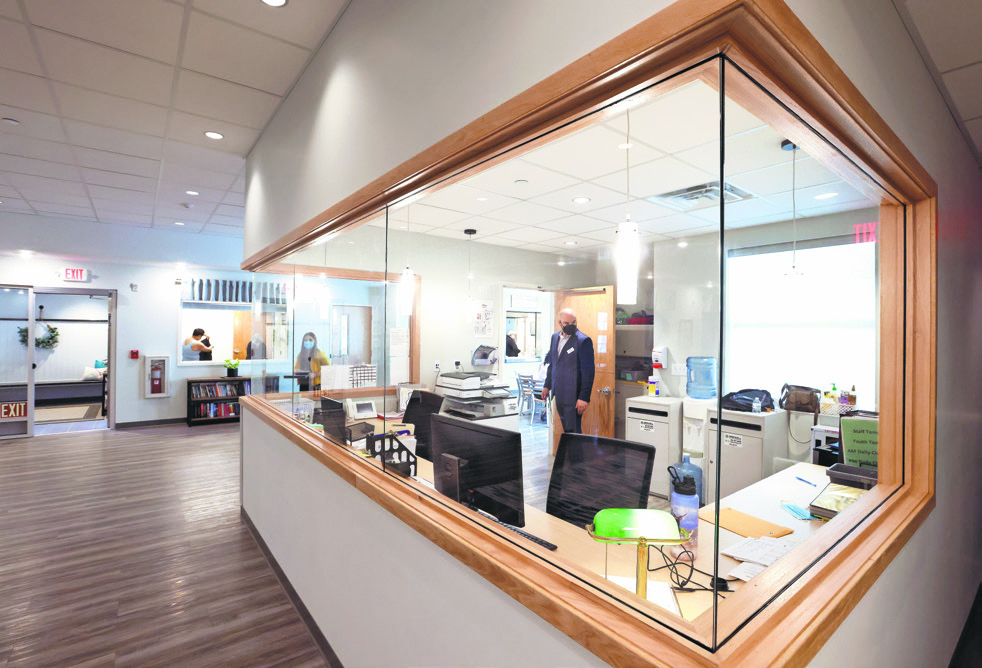 The staff area in the Dave and Lisa Goldberg Crisis Center looks out in three directions Tuesday. 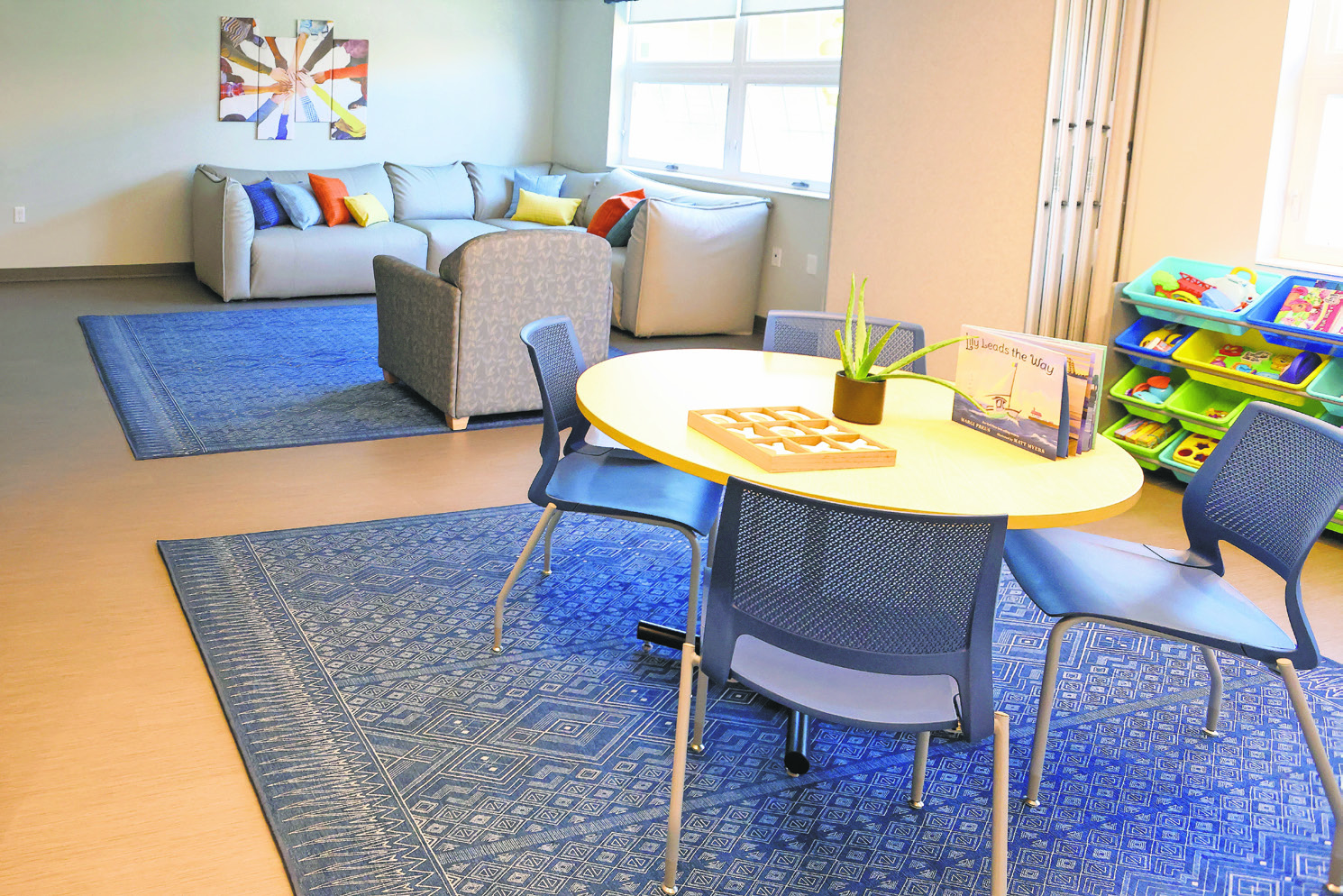 Two of the family resource rooms in the Joseph and Nancy Bullyan Family Resource Center. 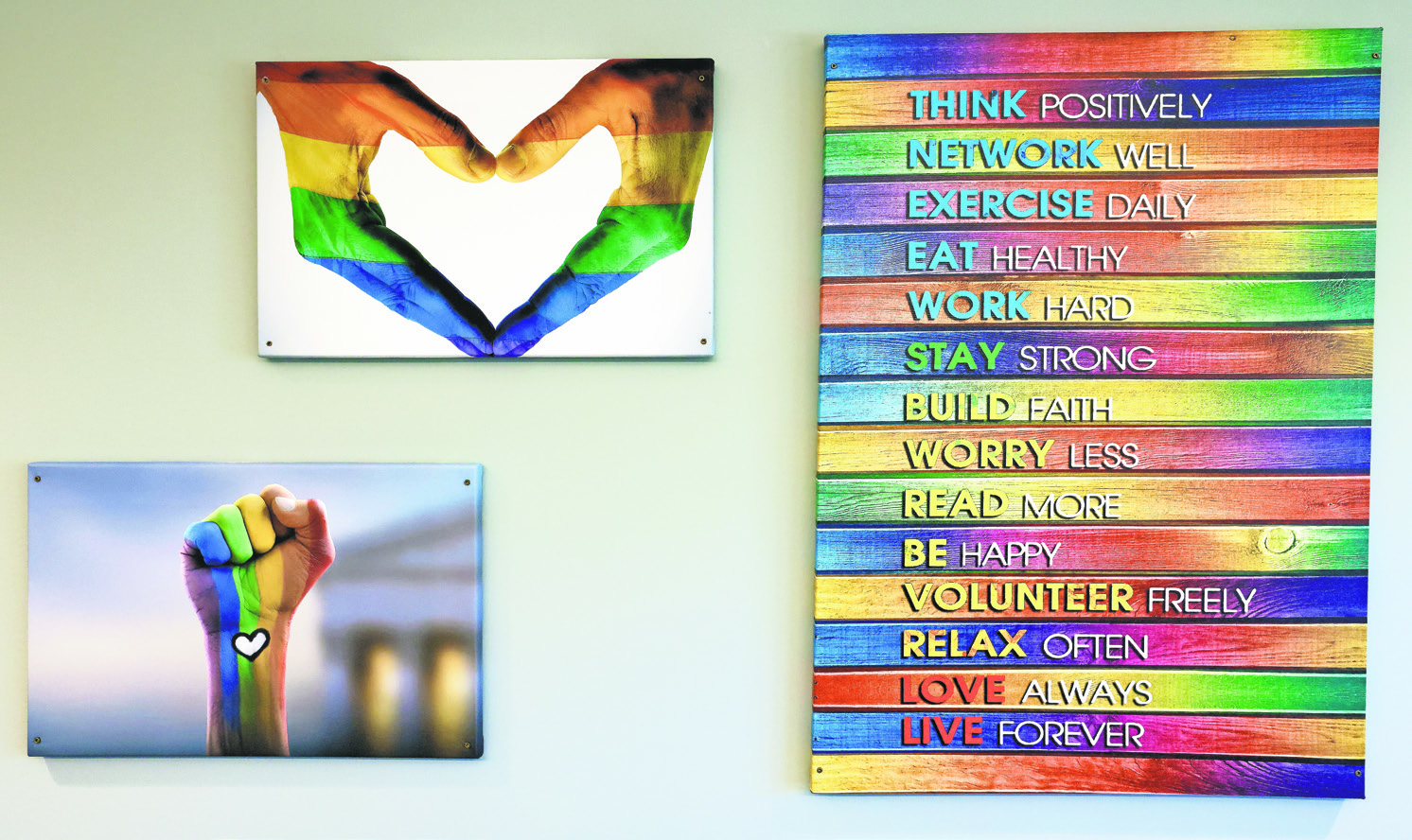 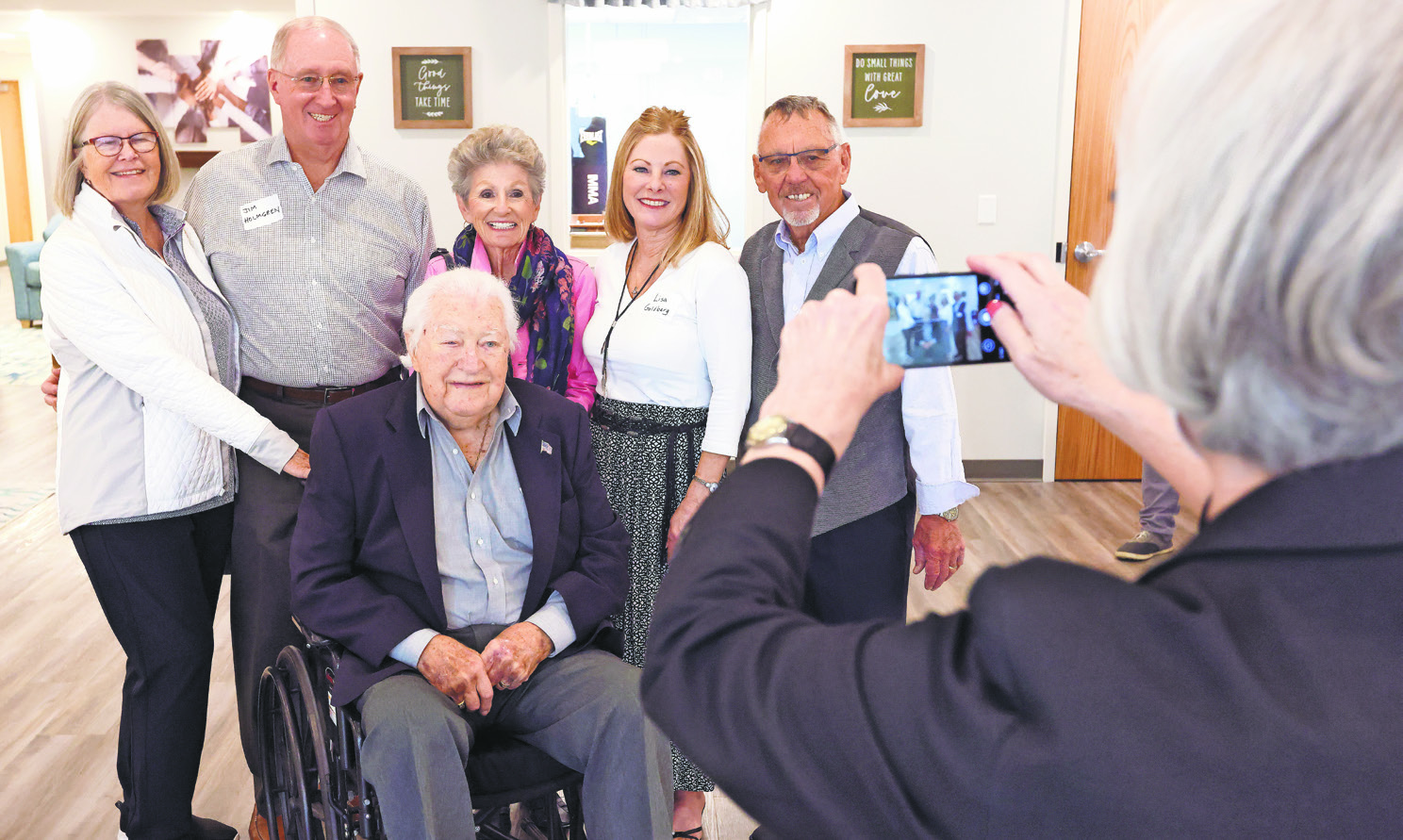 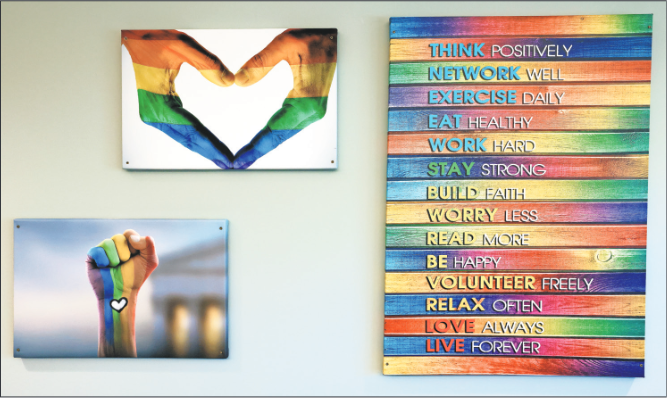 Right: Colorful artworks hang on many of the walls of the new LSS Bethany facility. They are designed to be welcoming and affirming, said Dawn Shykes, senior director of youth, children and family services.
PREVIOUS IMAGE

The Lutheran Social Service Bethany youth shelter and family resource center in the Morgan Park neighborhood is now accommodating children and families at its new facility.

LSS Bethany can house up to 17 children at a time in its short-term, emergency facility, the Dave and Lisa Goldberg Crisis Shelter.

In addition, the attached Joseph and Nancy Bullyan Family Resource Center will allow for staff and social workers to guide and coach families to improve home environments and help children process trauma they may have experienced.

“We really wanted to do some work specifically with families to build stability and resiliency for them,” said Dawn Shykes, senior director of Children, Youth and Families at LSS of Minnesota.

The $3.3 million facility was built on the same lot as the previous crisis shelter, which was built in the 1970s and moved to Morgan Park in the 1980s. The rebuild began last year, but has been in the works for longer than that. Donors Joe and Nancy Bullyan and Dave and Lisa Goldberg pushed for the new facility, designating $1 million to get the ball rolling, with other community donors bringing in the rest of the funding.

The Goldbergs first became familiar with LSS Bethany 11 years ago during a personal family emergency and have been supporters ever since.

“We saw what kind of facilities that they were working with, and we said, ‘Gee, we’ve got to brighten it up. We’ve got to put some paint in here.’ Well, obviously, it ended up more than paint,” Joe Goldberg said. “The staff here was so outstanding and so caring.

They were working with less than desirable facilities and yet were making it happen, and we could see what good could be accomplished, so we gave them more to work with.”

The former shelter was a multilevel, single-family home that was outdated and experiencing water damage in the basement.

“We went through the old building and they’re telling us all the problems they’ve got with it: the leaky basement and the flooding and all that, and I said, ‘Hell, you need a new building,’” Joe Bullyan said. “And that’s the start of it.”

The new shelter is much larger than the former one, allowing Bethany to house five more children. The single-level shelter is also Americans with Disabilities Act compliant and features a commercial kitchen and open layout to improve staff supervision capabilities. The family resource center is an entirely new offering for the Morgan Park location.

Gregory said having a brand-new facility is a way to show the children that they are important and deserving of love and care.

“The kids deserve it,” Lisa Goldberg said. “They’re already frightened, so to come somewhere that’s clean and new helps take some of the pressure off of them, too.”

Many children who come to the crisis shelter — often experiencing family conflict, neglect, abuse, substance abuse, truancy, are running away or out-of-home placement — feel like they are in trouble, Gregory said.

“Sometimes they did make bad decisions, or sometimes they’re here because of decisions parents made,” he said.

“Either way, we don’t pass judgment. We always meet kids where they’re at.”

One new shelter feature that Shykes and Program Director Duncan Gregory said is a highlight for them is the customized-care area. This wing has two bedrooms, a small living area and a private bathroom that will allow siblings to stay together during their time at the shelter. In addition, the space is ideal for children who need special accommodations for certain mental health, disabilities or behavioral conditions because it gives them a more private space.

The two shelter wings are divided by gender, with five bedrooms and two bathrooms in each corridor. In the customized care area, for the first time, children at Bethany who are nonbinary, gender fluid or transgender will not be required to choose a gendered living space.

The shelter and the family resource center both have supplies for children and families who need them, including clothing and hygiene products.

Children at Bethany can take everything they receive during their stay with them when they leave, including tie blankets that were donated to the shelter.

Each child at the shelter gets a private locker for whatever belongings they bring with them.

“I think that’s really important when a kid comes in and they’ve got nothing but a garbage bag with their belongings in,” Gregory said. “To be able to put them in a safe place and not have to worry about it again reduces that trauma. It’s all about whatever we can do to reduce the trauma that they may be experiencing and we think these small little things mean a lot to them.”

Gregory and his staff have a special attachment to the mantle in the shelter, which was moved from the chimney in the former facility. A common saying among staff is “there are angels in our chimney,” because of the low levels of incidents at the shelter and the protective space Bethany is for the children there.

“The reason we brought this mantle over is because there’s a strong belief that there are angels in our chimney over there,”

Gregory said. “We couldn’t bring the entire chimney over, so we brought the mantle to bring the angels with us with the blessings that we received in that building, hoping that they transferred to this building.”

The fenced-in yard has a large patio, and a basketball court and playground are being installed. Gregory said the basketball court is a place where kids really open up about their feelings and experiences, plus it’s an outlet for them to decompress.

“Playing different types of games with them with the basketball that are therapeutic and they don’t even know that they’re therapeutic.

That’s been a great opportunity for us over the years to do that.”

Inside, there are two recreation spaces with new exercise equipment, and ping-pong and foosball tables. Shykes said there are also many day trips to the Boys and Girls Club and Valley Youth Center so children know of safe spaces to spend time.

“One of the things that we really care about with kids, is when they come here, we try to expose them of all different types of healthy, positive physical exercise and activities,” Shykes said LSS Bethany accepts children from across the state as needed, and also sees many children from Douglas County, Wisconsin. Depending on the number of children and their needs, the shelter will be hiring more staff. Gregory hopes to have 20 or more, and the shelter is also seeking volunteers and donations.

“Growing up in Duluth, I can remember years ago the Bethany house and I always wondered what kind of children were there and what was going on,”

Nancy Bullyan said. “So to be part of this and know what’s going to happen, they have a place. They have a future and that’s the most important thing.”

A major flood in the basement of the old facility pushed the move-in date of the new shelter ahead a couple of weeks, but the process went smoothly. The old shelter will be torn down now that the new facility is complete.

“Our mission is to inspire hope, change lives and build community,” Gregory said. “What a beautiful space to do that in.”